The Leading Source for Railroad History for 101 Years

The Railway & Locomotive Historical Society, Inc., founded in 1921, is the oldest organization in North America devoted to railroad history, and among the first anywhere to pursue formal studies in the history of technology. The Society promotes research and encourages preservation of documentation and photography of business history, finance, labor history, and biography as well as technology.

We count by calendar years. Since the original charter, published in 1921, said the annual meeting will be held on the first Saturday in January most likely the first formal meeting was early in January 1921. Thus, the 96th year began on January 1, 2017. 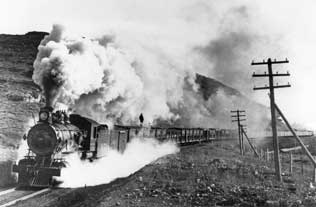 Fred Jukes photo, Union Pacific near Laramie, Wyoming, about 1904, from the R&LHS archives. Some say Jukes, a long-time member who took his first railroad photo in 1893, was the first railfan photographer.

The organization is nationally-known for its annual awards for significant and long-standing contributions to the writing, preservation, and interpretation of North American railroad history: the Gerald M. Best Senior Achievement Award, David P. Morgan Article Award, George W. and Constance M. Hilton Book Award, and Fred A. and Jane R. Stindt Photography Award. A documentary video award was added in 2016. The Arthur D. Dubin Medal, first awarded in 2009 to Dubin, honors lifetime contributions to the study of railroad history.

The Southern California Chapter, which preserved Big Boy 4014 for 52 years at its Rail Giants Train Museum in Pomona, in 2013 reached an agreement with Union Pacific to return the locomotive for restoration and operation on UP in time for the 150th anniversary of the golden spike ceremony in 2019. R&LHS recognized the chapter’s action in an advertisement in Trains magazine’s special issue “Big Boy on the Road to Restoration” in 2014.

The R&LHS logo, designed by Otto Kuhler, first appeared on the cover of Bulletin 28 in 1932. From the online index, we learn that when Kuhler had an exhibit in New York and Boston in 1933, he had been providing cover illustrations for the Bulletin for two years. In “Otto Kuhler, an Original,” David P. Morgan, editor of Trains, called Kuhler (1894-1977) “a legend in his own time.” The article in Trains (October 1975) goes on to praise Kuhler’s talents in painting, inventing, industrial design, and ranching. In the 1930s, he streamlined locomotives for companies such as the Baltimore & Ohio, Milwaukee Road, Lehigh Valley, and Alco.

Railroad history has many facets–corporate development, finance, engineering, public policy, biography and labor history, to name just a few. It has close ties to business history and the history of technology and industrial archeology. Railroad history is partly the evocation of a romantic nostalgia, partly the precise enumeration of locomotive specifications. It is the “far” history of the John Bull, Norris 4-4-0s, and William H. Vanderbilt; the “near” history of gas turbine locomotives, Baldwin “centipedes,” and Norfolk Southern’s 21st century steam program. Whatever the particular subject, railroad history is unquestionably significant. It is also perishable. Memories fade; documents are destroyed; physical properties disappear; corporate structures disintegrate. The role of the Railway & Locomotive Historical Society has since 1921 been and will continue to be to preserve, promulgate, and interpret the accomplishments of railroad transportation through history.