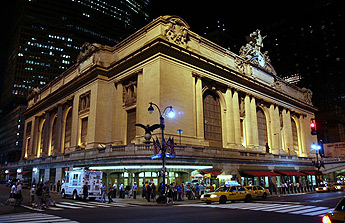 The New York Chapter was the first R&LHS chapter to organize, having done so in 1934. Our membership has included Rogers Whitaker (aka E. M. Frimbo), Railroad Magazine editor Freeman Hubbard, author Roger Arcara, and New York Central’s Charlie Smith (who was chapter chairman for many years.) We hold monthly meetings ten times per year (January-June and September-December) on the second Friday of the month. Meetings always feature a program. Recent ones included film of Erie steam in regular service out of Jersey City, Roger Arcara film of BMT subway trains in Brooklyn and Queens, and a program about Walkway Over the Hudson, the former New Haven Railroad bridge at Poughkeepsie (now a New York State Park), presented by Walkway’s Park Manager, Eric Hoppe.

We publish and distribute a six- to eight-page monthly newsletter, The Running Light, eleven times per year. It includes chapter news, history of railroads in the chapter area, information about members, the column Yard Office Rambles by Henry Deutch and Our Local Rail History by Tom Meehan.

Chapter meetings are held in the Williamson Library in Grand Central Terminal, New York City. All R&LHS members and their guests are welcome to attend. We meet at the gate of Track 23 on the Terminal’s Upper Level at 6:45 p.m. and are escorted to the Library (in a non-public part of Grand Central). Meetings normally run to about 9:00 p.m..